The Prijs der Nederlandse Letteren (Dutch Literature Award), the prestigious literary prize awarded once every three years to an author whose oeuvre occupies an important place in Dutch literature, will be awarded to Judith Herzberg this fall. This was announced by minister Ingrid Engelshoven on behalf of the Committee of Ministers of the Taalunie. The jury calls Herzberg’s poetry “heartbreakingly simple yet complex precisely because of it. Her precise observations from daily life reveal something essential about human traffic”.

Author of poetry and prose and playwright Judith Herzberg (1934) is one of the most famous poets in the Netherlands. In 1963 she made her debut with the poetry collection Zeepost. Since then many other collections followed, including Beemdgras, Strijklicht, 27 liefdesliedjes, Wat zij wilden schilderen, Zoals and Soms vaak. The anthology Doen en laten was one of the hundred bestselling books in 1994 according to the CPNB.

From the beginning of the seventies onwards, Herzberg also started to write plays, of which Leedvermaak is undoubtedly the best known. “Her plays were groundbreaking in the 1980s. Leedvermaak has made an indelible impression with the seemingly lighthearted way in which she expresses silence about war experiences”, the jury writes about her drama. In addition to her poetry and drama, Herzberg also wrote prose which resulted in the publications of, among others, Lieverbrief and Er was er eens en er was er eens niet. In 1997 Herzberg was awarded the P.C. Hooftprijs for her entire oeuvre.

In the jury report, the jury - chaired by Marita Mathijsen-Verkooijen - compares Herzberg’s language with music: “Her work can be compared to that of Nobel laureate Wisława Szymborska. It is always natural, so natural that it can only be the result of an enormous mastery of language and form, of technique, which is also evident from the way in which it uses sound. Her language approaches music”. 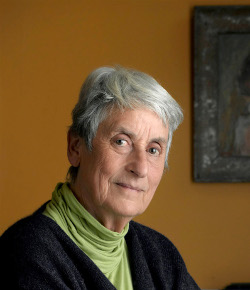 The work of Judith Herzberg has been translated, with support of the Dutch Foundation for Literature, into many languages, including Arabic, Bengali, German, English, French, Greek, Hindi, Hungarian, Spanish and Swedish.

The Dutch Literature Prize is awarded once every three years by the Taalunie to an author whose oeuvre occupies an important place in Dutch literature. The award consists of a sum of € 40,000. The prize is awarded alternately by the Dutch and Belgian royal family. In October of this year, King Willem-Alexander of the Netherlands will award the prize in Amsterdam.