Roel Schuyt (b. 1948) has been awarded the Dutch Foundation for Literature’s Translation Prize 2017. Since the 1990s he has translated work by a wide variety of writers from Central Europe, including Danilo Kiš, Dubravka Ugrešić and Borislav Čičovački, as well as young authors such as Goce Smilevski and Olja Savičević. He also wrote translation history by being one of the first to translate the work of Nobel Prize candidate Ismail Kadare directly from the Albanian. The prize, which includes the sum of €10,000, was presented in Amsterdam on Friday 8 December, during the Literaire Vertaaldagen.

Schuyt studied Slavic languages and literature in Amsterdam and completed his postgraduate studies in 1990 at Leiden University with the dissertation The Morphology of Slavic Verbal Aspect. He went on to become a full-time literary translator from Serbo-Croat. In the 1990s he taught himself Albanian, a language unrelated to the Slavic tongues, so that he would be able to read and translate the Aesopian literature of Nobel Prize candidate Ismail Kadare. The turbulent history of the Balkans shows through in his translations, in the splitting of the languages of the former Yugoslavia and above all in the subject matter and diversity of the authors. ‘His’ authors are not afraid to experiment or to examine the painful history of war in their countries. Think of the acute analysis of Central Europe by essayist Dubravka Ugrešić, the construction of a socialist Yugoslavia after the Second world War in the trilogy De nieuwkomers by Slovenian Lojze Kovačič, the Bosnian War of 1992-95 in Sarajevo – Portret van een in zichzelf gekeerde stad by Dževad Karahasan, or the desolation of post-war bathing resorts in the novels of a new generation of authors, such as Vaarwel, Cowboy by Olja Savičević or the work of Goce Smilevski.

As well as prose, Schuyt translates poetry, including works for the Poetry International Festival. 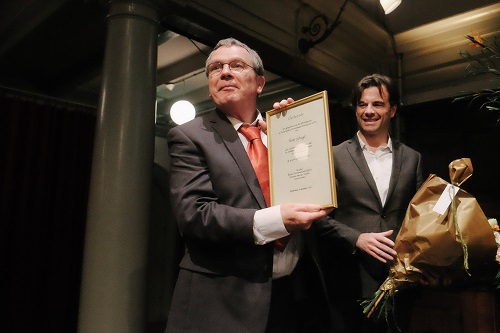 Tiziano Perez, director of the Dutch Foundation for Literature, presents Roel Schuyt with his certificate and flowers. Photo: Victor Schiferli

The jury of the Dutch Foundation for Literature’s Translation Prize 2017 regards the translation of prominent works from small, less accessible language areas as of special value, since it helps to give greater subtlety and depth to our image of Europe. The jury praised Schuyt’s work, concluding that ‘his record for translation quality is impeccable. In his thirty-five-year career as a literary translator he has made available to the Dutch reading public a great many works of exceptional quality, written in many different languages: an admirable achievement. All his translations do justice to the style of the authors, no matter how much they may differ. Roel Schuyt has given us access to a region that is of great importance from a cultural and political point of view, a region moreover where new, upcoming literary voices promise to give a fresh stimulus to European literature.’ During the presentation of the prize, Schuyt was surprised by a personal video message from ‘his’ author Ismail Kadare:

‘From the beginning the Foundation has shown confidence in my qualities as a translator and in the literary standard of the books I was invited to translate,’ Schuyt said in his acceptance speech. He also stressed the importance of the Foundation, saying, ‘We should realize that a unique situation exists in the Netherlands when it comes to remuneration and support for translators.’

The Dutch Foundation for Literature’s Translation Prizes are awarded to literary translators who distinguish themselves both by the high quality of their translation work and by their efforts as ambassadors for a linguistic region, a genre or for literary translation in general. The prize is presented annually to a translator into Dutch, and in even-numbered years also to a translator from Dutch. Each prize consists of €10,000. 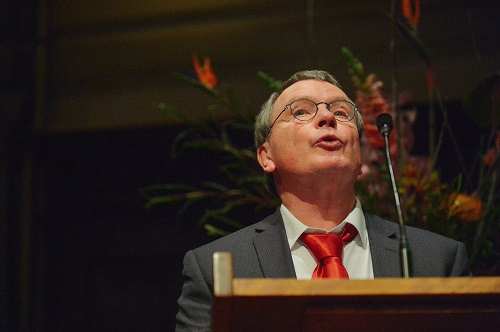 ‘All translators are unique, but some are more unique than others. Roel Schuyt undoubtedly belongs in the latter category.’ - Jury