Literature from the Low Countries

From 14th - 19th January 2013, from Liverpool to London
Six top writers from the Low Countries toured to six cities for six nights of readings & debates, to showcase high impact literature from Flanders & the Netherlands in English translation.

The writers on the tour are the low countries literati: they are all prize-winners and best-sellers back home, all writing in Dutch but from two different countries – Belgium and the Netherlands. Now, in a unique collaboration, six of the best Dutch-language storytellers are coming together for a rock star-style tour of six English cities – to perform for us and to discover what they may (or may not!) have in common.

Sponsored by Flanders House and the Netherlands Embassy in London and curated by Rosie Goldsmith, known in the UK as a champion of international fiction, High Impact is a unique idea with a unique group of writers. You’ll see the Dutch Poet Laureate side by side with Flanders’ leading graphic novelist; two global best-sellers, a thriller writer, a celebrated historian and a travel writer – together on stage every night.

Selected by Rosie from across Flanders and the Netherlands not only for their brilliant books but also for their wit, wisdom, fluent English and performance skills, these authors will wow you with their readings and ideas. Each night a different city, a different theme, a different type of venue (a church, theatre, an arts centre). And if by the time they reach London for their final gig you’re still unconvinced of the high impact of Low Countries, the impact level will be boosted even further when they perform alongside English writers such as Tracy Chevalier, Deborah Moggach and David Mitchell, themselves famous for writing on Dutch themes. Her journalism & non-fiction books on Africa, China, the Middle East & Europe have earned her the reputation as the VS Naipaul or Ryszard Kapuscinski of the Low Countries. Author of the acclaimed The Rebel’s Hour (Atlantic, 2008)
‘Powerful and timely, intensely imagined’ (Paul Theroux) Former actor & comedy star; best-selling novelist – in the Netherlands & round the world – of the thrilling, chilling mega-hit The Dinner (Atlantic, 2012)
‘Proves how powerful fiction can be in illuminating the modern world’ (The Economist) This year’s winner of the prestigious AKO Literature Prize & author of the magnificent psychological thriller The Guard (Maclehose Press, 2012) ‘A rich and gripping mix of all the ingredients that make for a truly haunting atmosphere’ (Writers’ Hub) The Posy Simmonds of Belgium; the bold & brilliant graphic novelist of When David Lost His Voice (Self Made Hero, 2012)
‘Big, bleak, brilliant and stark’ (The Economist)

The Tabernacle (35 Powis Square London W11 2AY; www.tabernaclew11.com) for an evening of music, beer, cheese and literature, when our Low Countries Literati will be joined by UK writers with Dutch links, including Tracy Chevalier & Deborah Moggach.

Michele Hutchison will act as dedicated blogger and Dutch literature specialist on the tour. Here’s an overview of her entries:

High Impact is a joint commission of the Netherlands Embassy & Flanders House, London.

Flanders House is part of the Belgian Embassy, with the role of promoting Flanders in the UK. From the Dutch-speaking part of Belgium, the Flemish have their own culture and traditions which they proudly share with the UK.
www.flanders.be/london

The Kingdom of the Netherlands Embassy, London

Thousands of Dutch people from the Netherlands have established themselves in the UK. Like the Flemish, the Dutch community is well integrated in British society & works closely with the UK. More information

Rosie Goldsmith is a journalist specialising in arts and current affairs, in the UK & abroad. Over 20 years’ working for the BBC, she has presented flagship BBC shows like Front Row, Open Book, Profile, A World In Your Ear & Crossing Continents. She has been the chair of European Literature Night in the UK since its launch in 2009, runs the independent European Literature Network, chairs, curates & promotes arts & literature events in the UK & round the world.

Nick Chapman is a literary events producer, with experience working with both international & UK writers for the British Council and International PEN. In 2012 he co-produced the Poetry Parnassus UK Tour and events for the European Commission with Speaking Volumes Live Literature Productions.

Students at Sheffield University discussing ‘The Dinner’ by Herman Koch. 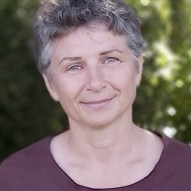