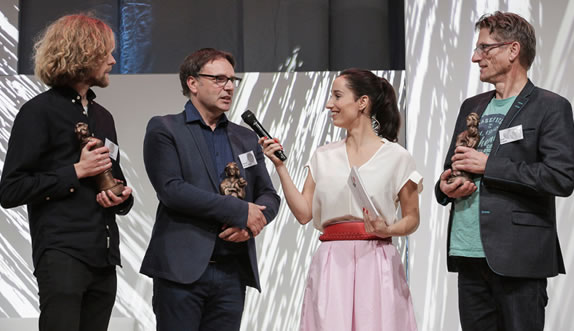 The fact that this prestigious prize has been awarded in the year that Flanders and the Netherlands are guest of honour at the Frankfurt Book Fair makes it extra special.

The other nominees were The Golden Cage (Carll Cneut, Anna Castagnoli and Ulrike Schimming, Bohem Press) in the picture book category, and the novel This is Not a Diary (Erna Sassen and Rolf Erdorf, Freies Geistesleben), in the young adult category. The latter was also in the running for the prize from the young-adult jury.

Der Hund, den Nino nicht hatte by Edward van de Vendel and Anton Van Hertbruggen tells the story of a little boy and his imaginary dog. The dog dares to do anything at all, but it is also very much aware of Nino’s feelings. One day the fantasy dog is no longer there and Nino gets a real dog. In this warm story, the text and the images subtly amplify Nino’s loneliness. Originally published by De Eenhoorn, the book was translated by Rolf Erdorf and published by Bohem Press. As well as German, it has been translated into English, French, Danish, Portuguese (Brazil), Korean and Chinese.

The Dog that Nino Didn’t Have is a real prize animal. Van Hertbruggen won several prizes at home and abroad with his debut, including the Silver Palette 2014. Remarkably, he is the first Fleming ever to have picked up a Silver Medal from the Society of Illustrators in the US.