Both Edward van den Vendel and Erna Sassen have been nominated for the Deutscher Jugendliteraturpreis 2016.

Edward van den Vendel has been nominated along with Flemish illustrator Anton Hertbruggen for the German version of the picture book The Dog that Nino Didn’t Have (Bohem Press).
The German translation of Erna Sassen’s This is Not a Diary (Freies Geistesleben) is in the running for the prize awarded by the Youth Jury, and for the prize awarded in the children’s books category. Both books were translated by Rolf Erdorf.

The winners will be announced on Friday, October 21 at the Book Fair. 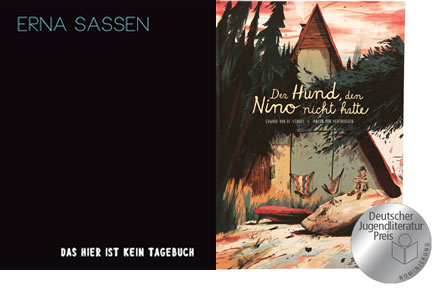