Today former managing director of the Dutch Foundation for Literature, Pieter Steinz received the very first copies of Der Sinn Des Lesens, the German translation of his book Lezen met ALS (Reading with ALS). It will be available in German bookstores mid July. Sooner than expected, as the title was announced for August. Thanks to translator Gerd Busse and to Reclam Verlag the production process was shortened.

On its website Reclam Verlag posted an interview with Pieter Steinz on writing this book. Furthermore BuchMarkt, a German magazine for booksellers, will publish an online interview on the Der Sinn des Lesens in the near future.

In Lezen met ALS. Literatuur als levensbehoefte (Nieuw Amsterdam), Steinz describes in a both direct and humoristic manner the deterioration of his bodily functions, as well as the journey through medical institutions which his illness inevitably brings about. Literary classics such as The Count of Monte Cristo, Het Bureau by Dutch author J.J. Voskuil, Oblomov, The Magic Mountain and Memoirs of Hadrian were his outset for essays on powerlessness, saying farewell, resignation, pain, as well as depicting the more beautiful things that a terminal illness brings along.

The German translation by Christiane Burkhardt of Steinz’ Made in Europe is expected in Septembre at Knaus Verlag under the title Typisch Europa. Ein Kulturverführer in 100 Stationen. 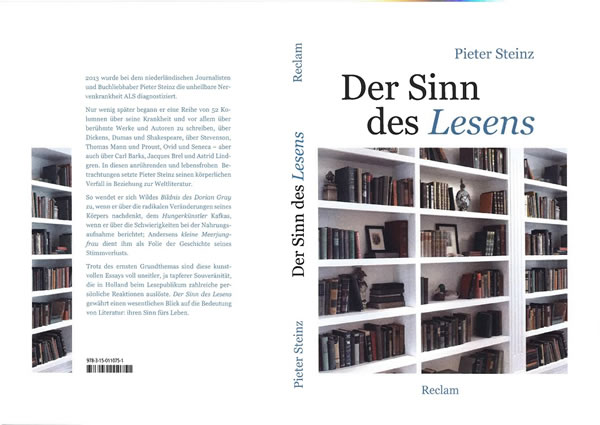