A Barrel Full of Stories

Compassion for the eccentric characters in our world.

So pirates are all thieving sea robbers, are they? According to writer Marjet Huiberts, the boat on which her protagonist, Aadje the Pirate, sails the seven seas is more of a care boat for the disabled.

Her rhyming stories for young readers feature characters including No-Hand Jon, Wooden-Leg Joop and Eyeless Jeff, who have been taken under the loving wing of Father Pirate.

The picture-book stories were illustrated by Sieb Posthuma, who was a master at finding the right balance between humour and tragedy. When Aadje writes a letter to his mother, because he misses her very much, he gets some help from No-Hand Jon, a kind pirate whose hair is sculpted into the same shape as the hook on his arm. Sitting on a canon, the two of them write a sensitive letter.

This book contains the best stories about the beloved young pirate. An endearing read-aloud book packed with great humour and pace and with compassion for the eccentric characters in our world. 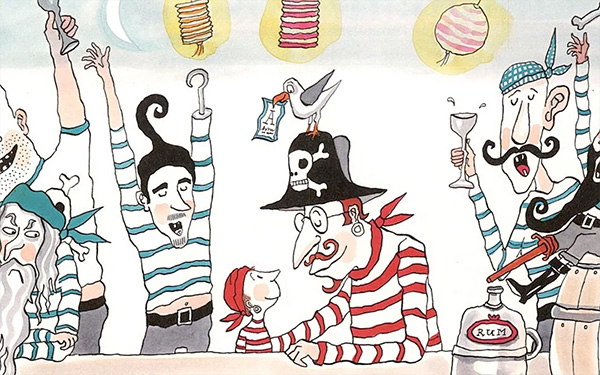 Marjet Huiberts (b. 1960) wrote for the theatre and children’s television for years before entering the literary world with her light-hearted rhyming picture books. One title from her popular Aadje Piraatje-series about a little pirate has been translated into Chinese, and her book Mijn zusje…