From Istanbul to Baghdad

In 2010 author Arnon Grunberg travelled by car through the Middle East and wrote a series of articles for NRC. On the basis of these reports, photographs and Grunberg’s blog pieces, Kolk created the graphic novel Van Istanbul naar Bagdad, a road movie in pen and paper.

The colouring is extremely functional and the layout is occasionally symbolic: some drawings are framed with barbed wire. As a narrative thread within this fragmentary material, Kolk concentrates on the difficult relationship between the writer and his interpreter, but he also does something that is possible only in fiction: he brings back to life a girl who died in the poison gas attack on the Iraqi city of Halabja in 1988 as an imaginary interlocutor for Grunberg: “I can create a small monument for her.” This is a book that narrows the gap between comics and literature.

Arnon Grunberg lends himself as a comic-book character just as well as Woody Allen. Kolk’s caricature of him is beautiful. 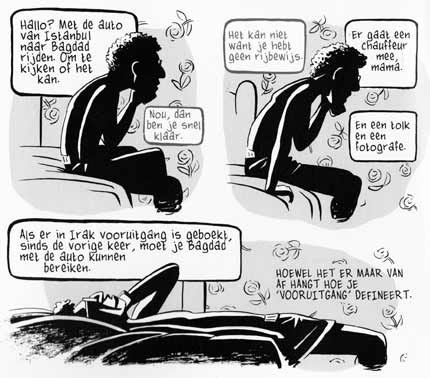 Arnon Grunberg (b. 1971) debuted at the age of 23 with the wry, humorous novel novel Blauwe maandagen (Blue Mondays, 1994), which brought him instant success. Some of his other titles are Figuranten (Silent Extras, 1997), De asielzoeker (The Asylum Seeker, 2003), De joodse messias (The Jewish…

Hanco Kolk (b. 1957) has created a diverse body of work, achieving success in both mainstream comics and the graphic novel. His first comic strips appeared in underground magazines in the 1970s. He worked with Peter de Wit to produce the popular strip Gilles de Geus (published in English as Bryant…