The Dutch Foundation For Literature has the task of supporting writers and translators, and of promoting Dutch literature abroad. It invests in the quality and diversity of literature through grants for writers, translators, publishers and festivals, and contributes to the production and distribution of Dutch and Frisian literature at home and abroad. With the support of the Dutch Ministry of Education, Culture and Science, it aims to promote a thriving literary climate, embedded in literary history and attuned to the latest developments in the publishing industry. 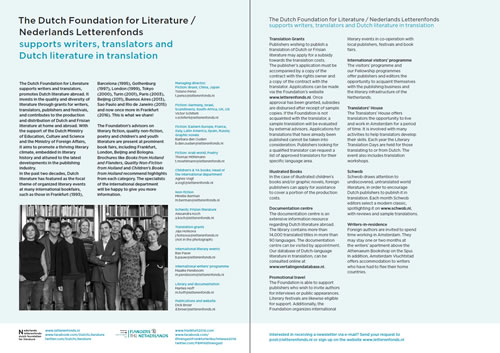 Download the infosheet (.pdf) containing detailed information about the workings of the Dutch Foundation for Literature.